Children and their families from Oxfordshire going through the emotional aftermath of domestic abuse are to feature in a special BBC2 documentary on Wednesday, February 6 at 9PM.

Award winning film-maker Anna Hall has been following a number of Oxfordshire families and working with the county council, local charities and Thames Valley Police over a three year period to put the documentary together.

Anna was given unprecedented access to children who have all witnessed or experienced domestic violence and to the Oxfordshire County Council social workers who have worked with the children and their families. 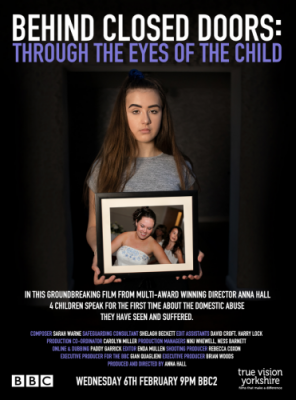 One in five children in the UK has lived with an adult who was or is a victim of domestic abuse and 750,000 children each year see or suffer abuse which affects them forever.

Zara, 13, who grew up in a violent home which led to her mother having to leave her father, Ollie, 8, who saw his mum being attacked by her boyfriend and who still live in fear of him and 14 year-old Kirstie, whose mum was subject to violence and coercive control by her partner for ten years all feature in the documentary – which is called “Behind Closed Doors: Through the Eyes of the Child”.

Lucy Butler, Oxfordshire County Council’s Director for Children’s Services, said: “I was very moved by all of the children who were so open and honest in the documentary. We know what a devastating affect domestic abuse can have on the whole family and as a county council one of our main aims is to strive to give every child a good start in life and protect them from the impact of domestic abuse.

We seek to work with children to ensure they and their families can re-build their lives to the extent that they can have a great future despite what has happened to them.

“We are proud to see our work highlighted in this way – due to its very nature that work can often go unseen and unsung. However it is skilled, specialist and complex work and we hope it will encourage people in Oxfordshire to consider whether a career in children’s social care may be the chosen path for them.”

Anna Hall the director of the documentary, who has been nominated for five BAFTAs in the past four years said: “ This film is the culmination of a fantastic working relationship with all the agencies in Oxfordshire who are concerned with frontline domestic abuse.

“When I first discussed this film I was incredibly impressed that a social care department would consider opening its doors and want to help the general public understand that children are the hidden victims in domestic abuse relationships. It’s so important we hear their voices”.